Now more than ever, the ACLJ remains especially vigilant and ready to defend the Constitution and conservative values.

The fate of the nation is at stake. Radical forces are preparing to target the family, patriotism, respect for human life, religious liberty, the rule of law, and the independence of America’s greatest ally in the Middle East, Israel.

From 2009 to 2017, the ACLJ fought against the lawless, ethically challenged Obama-Biden Administration. Now with the Biden-Harris Administration, we fear more of the same, or worse.

The radical Left is seething for power, yearning to tear down America. The ACLJ has helped bring about tremendous constitutional victories over the last four years. And we will tirelessly defend them – in court, in Congress, and in the media. We will vigilantly stand against the far Left's lawlessness and corruption.

We are your voice. We fight for you. And we can win.

YOU are the ACLJ, and the ACLJ is needed NOW MORE THAN EVER.

The radical Left is preparing to dismantle our conservative republic and rebuild it according to their radical agenda.

Under the Trump Administration, the ACLJ successfully pushed back dangerous liberal agendas of the Left, battled the Deep State, exposed corruption, blocked extreme abortion legislation, and fought for - and won - numerous victories for life, the Constitution, and your religious liberty.

Now we face an all-out assault on the Constitution, religious freedom, and the unborn. As the Left tries to demolish all the positive momentum we’ve achieved, the work of the ACLJ is more vital than ever before.

As we take action to defend conservative values, we need your support now more than ever. Donate today.

Thank you for making a donation!

Thank you for making your generous, tax-deductible gift to the American Center for Law and Justice. Your support is greatly appreciated. A confirmation of your gift will be emailed to you shortly. To learn how we manage the resources you provide,  click here.

For two decades the ACLJ has successfully preserved our freedom & liberty. We rely on your tax-deductible gifts to continue our work & we strive to use your donations with prudence & respect. Your online donation is
completely secure using this form
ACLJ Efficiency:
Annual Report 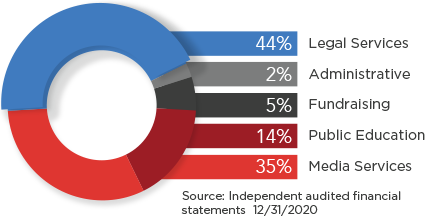 Your data is secure:
✔ Learn More

ACLJ.org is a verified merchant through Authorize.net
The ACLJ selected by